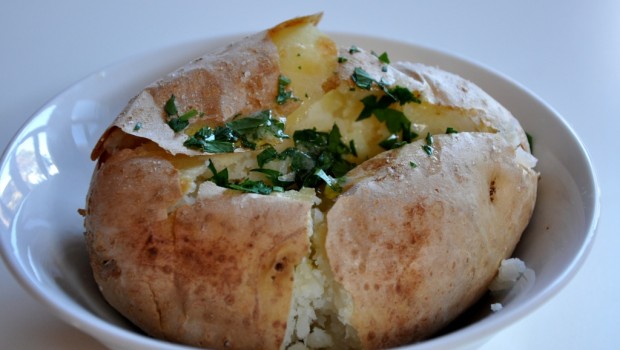 I really enjoy the simplicity of potatoes and the diversity of colours and texture that each variety has to offer. However for a period I felt things were becoming just a bit too generic. National supermarket chains were over simplifying things by labelling them according to their purpose such as potatoes for mashing, roasting, or boiling. Makes sense for a time poor shopper, but it meant that great names my grandfather taught me like Maris Piper, Jersey Royals and King Edwards were disappearing from our culinary vocabulary. The fact that a lot of people no longer knew the difference between a Royal Blue and a Jersey Royal, due perhaps to commercialisation, actually began to irritate me to the point of a mini rant.

Fortunately consumerism is a fickle beast and the growing interest in food has seen the demand for a generic ‘spud’ reversed.

In the last 18 months I have seen resurgence in the spuds popularity. There is greater emphasis placed on marketing potatoes by individual variety, there is also a growing selection readily available. Lots of the old favourites and plenty of new varieties seem to be popping up everywhere. And this isn’t limited to farmers markets, my local supermarket has often has 7+ varieties.

Now I realise that most people won’t feel quite as passionate about such a banal subject as the potato but next time you’re in the supermarket, try a variety that you have never heard of. Get the right spud for the job and you will be rewarded in spades of tasty carbs!

Here is a useful site to get you thinking:

Food doesn’t get much simpler than a baked potato. Find yourself the largest King Edward or Royal Blue you can.

Preheat the oven to 200 degrees don’t even think about using that microwave!

Scrub the spud, and stab it a few times with a fork. Now sprinkle some salt on the damp potato, (a tip that I got from Nigel Slater). Pop the potato in the oven for 1hr 15mins.

Serve the steaming fluffy spud with a generous dollop of sour cream and chopped fresh chives. 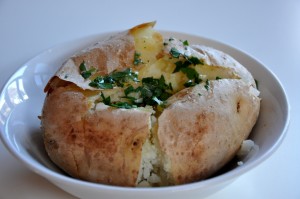