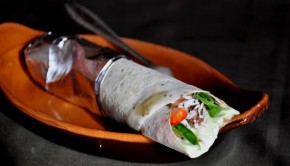 A few weeks ago, I started a new challenge: to inject a little more fun into some of my cooking.